We are saddened to learn that William Douglas Gardiner, Lambda 1939, has entered Chapter Eternal at the age of 101. Brother Gardiner was a distinguished Cal Alumnus, supporter of the Lambda Chapter, and veteran of the US Army. 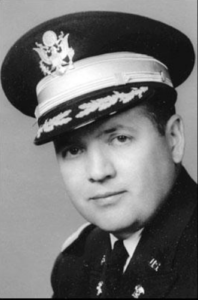 Brother Gardiner served 31 years in the US Army, retiring in 1973 as a Colonel

Brother Gardiner was born July 12, 1916, to Murray Starr and Belle Marsh Gardiner in Idaville, Indiana. He graduated from the University of California, Berkeley in 1939 and began working for an electric utility company. After Pearl Harbor, he enlisted in the Army and his brother Murray joined the Marines. He married Christine Johnson earlier that same year.

He graduated from Officer Candidate School and served in the US Army for 31 years. Brother Gardiner went on to obtain a master’s degree in business from Columbia University during his time in the Army. He was a veteran of World War II, Korea, and Vietnam, including 13 years of overseas duty. In 1973, he retired at the rank of Colonel as Inspector General at the Army Supply Depot, Oakland, California.

Brother Gardiner was as busy as ever in retirement, where he did everything from mentoring students at a local high school to writing Three Wars and Rusty Muskets, a biographical piece reflecting on his 31 years of service. He even continued playing golf until the age of 95 – making five holes in one during his many years. He also made trips from his home in Medford, Oregon, to visit his alma mater and Lambda Brothers. He reflected fondly on one such trip, saying “I’ll always remember the fun time at the 2013 Homecoming, when I was a mere 97 years young, and [Lambda] arranged for me to lead the Cal Band in the front room. If I may say so, the Band sounded as good in 2013 as it did when I attended the 1938 Rose Bowl.” 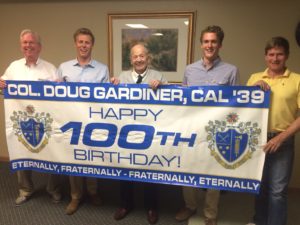 Brother Gardiner (center) with Lambda Chapter Brothers who surprised him in Medford, Oregon, for his 100th birthday in 2016