Regional Leadership Alliances Make an Impact Across the Country

By Daniel | Chapter News, National News | No Comments
One member said that the 2020 RLA “was a great experience that allowed me to meet brothers from different chapters and learn more about the Chi Phi Fraternity,” while another described it as “a great way to learn about the fraternity and further build myself into a better man.”
END_OF_DOCUMENT_TOKEN_TO_BE_REPLACED
0

By Daniel | Chapter News, National News | No Comments
Brothers, Friends, and parents of members at Central Michigan University came together at Mt. Pleasant on November 9 to celebrate the success of our men on campus as the former CMU Colony became the Tau Theta Chapter, joining the Chi Phi Fraternity as our fifty-second active, Chartered Chapter.
END_OF_DOCUMENT_TOKEN_TO_BE_REPLACED
0

By Daniel | Chapter News, National News | No Comments
This fall has been a busy time for the Fraternity with expansion opportunities at two major campuses, the University of Texas and the University of Tampa. As they work to establish their mission, vision, and goals for the coming years, Chi Phi is built for success with Brothers on both campuses.
END_OF_DOCUMENT_TOKEN_TO_BE_REPLACED
0

By Daniel | Alumni News, Chapter News, National News | No Comments
These Brothers have proved themselves as leaders both in their Chapters and in their academic pursuits. Thanks to the generosity of Alumni, undergraduate Brothers, parents, and Friends of Chi Phi, the Educational Trust was able to award thirty-four scholarships this year – eight more than in 2018.
END_OF_DOCUMENT_TOKEN_TO_BE_REPLACED
0

By Daniel | Chapter News, National News | One Comment
Originally founded in 1869 as one of Chi Phi’s earliest Chapters and Emory’s first Greek organization, Gamma’s return marks the continuance of one of our longest legacies.
END_OF_DOCUMENT_TOKEN_TO_BE_REPLACED
0

At West Virginia Wesleyan College on a crisp fall day in October, more than 21 collegiate Brothers and many dedicated Alumni of the Delta Xi Colony of Chi Phi gathered to receive our Charter. Delta Xi is now officially recognized as an active Chapter by the Chi Phi Fraternity. During this ceremony our Chapter was also significantly recognized with the presentation of the President’s Cup (right). This award distinguishes our Chapter from others on campus as exemplar in academics, service, intramurals, and social activity. It is a high honor to receive this award from West Virginia Wesleyan Greek Life and the College.

The fall semester proved to be a busy season for our philanthropic activity with the Brothers’ participation in a variety of service around our campus. West Virginia Wesleyan College stresses giving back to the campus and community and Delta Xi is an active contributor. We started on the first day of the semester! We lined up curbside to help the freshman arriving on campus unload their cars as they moved into their new dorms. 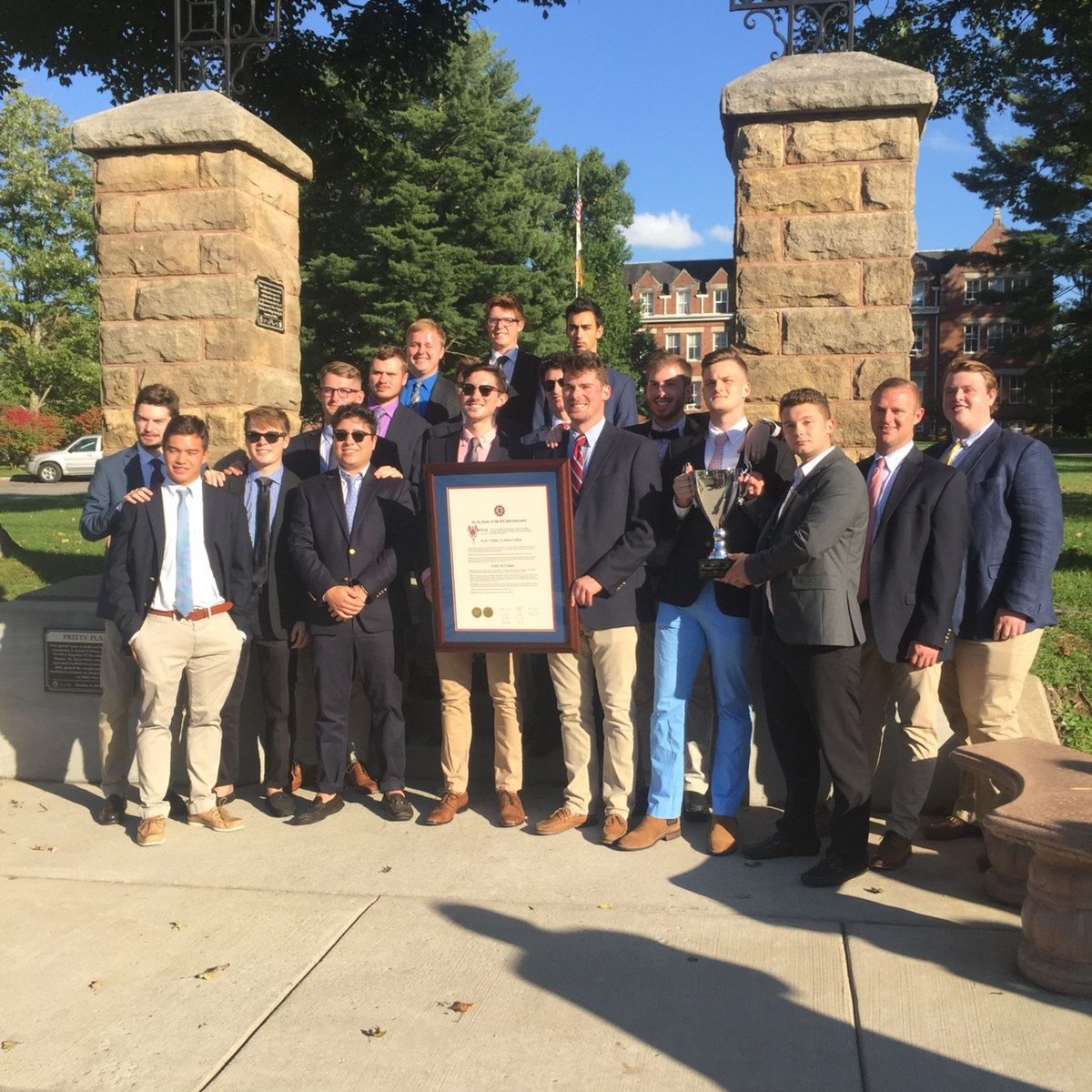 On Halloween, we participated by “trick or treating” for canned goods in the town of Buckhannon (below, right). These donations were used to boost one of the town’s local food pantries. Later in the fall on Community Unity Day we joined forces with Alpha Sigma Phi to do some clean-up work in local cemeteries and assisted some of the elderly population with fall landscaping (below, left). Working together to benefit others in the community always has a positive effect on us all.

After a setting the academic all time high GPA record last year in the Greek system here at West Virginia Wesleyan, we are striving to begin again to recapture this status. This fall the Brothers of Delta Xi topped the all fraternity average GPA for fall semester with a 3.54. The men of the scarlet and blue endeavor to continue this trend.

Together we have experienced academic success, opportunities for leadership, service, and social activities that are enriched because of our Brotherhood. With these things in mind we plan to carry on the rich tradition of the Delta Xi Chapter of Chi Phi that was established by all the brothers of Chi Phi since 1824. 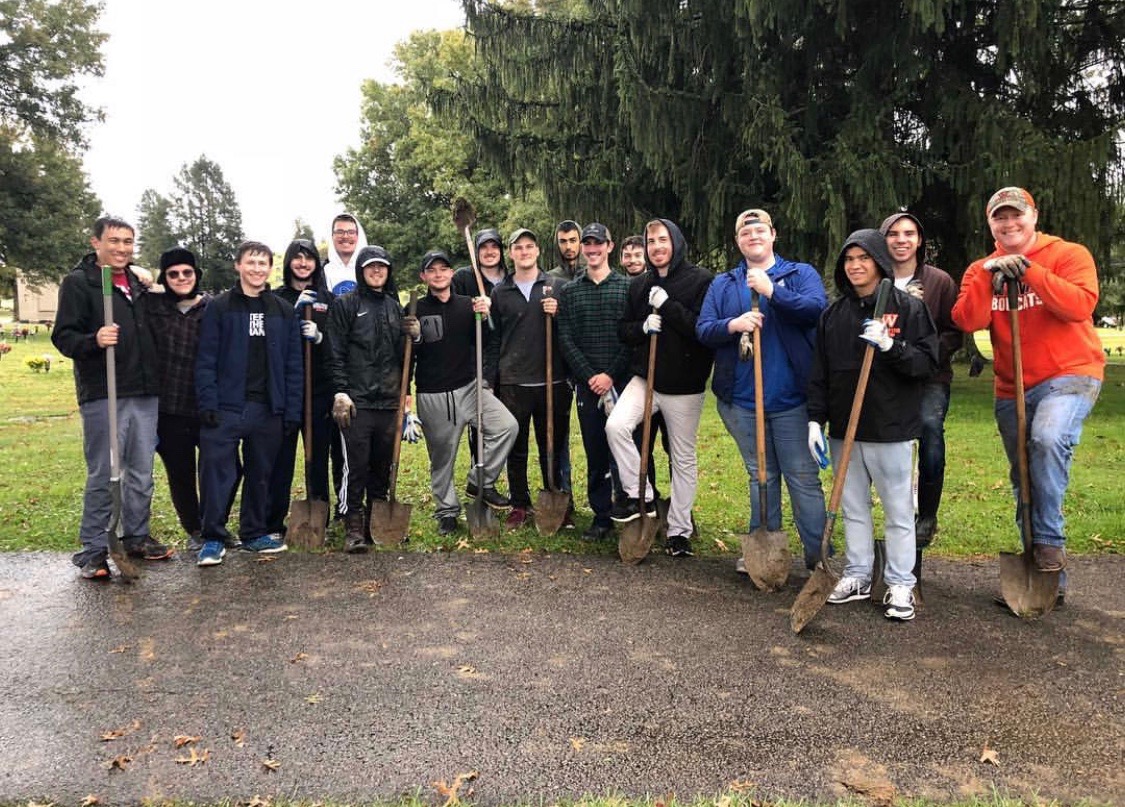 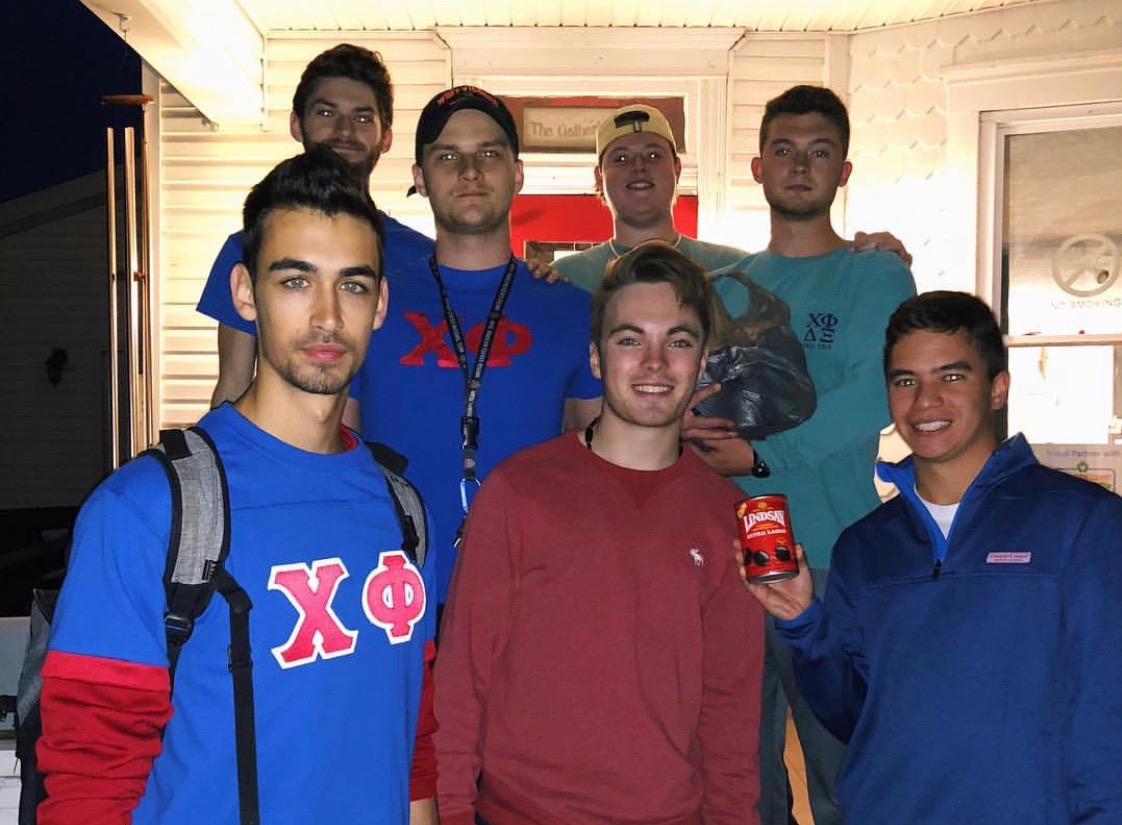 By Daniel | Chapter News | No Comments

Here in Lewisburg the Brothers of the Phi Lambda Theta Chapter at Bucknell University have kept busy in the classroom and on campus.

Our campus involvement is something that we have always taken great pride in. We have Brothers holding positions such as school president, orientation leaders for incoming first-years, admissions ambassadors, TEDx speaker coaches, volunteer firefighters, and residential advisors. Our Brothers are able to do all of this while still maintaining a strong academic performance.

We have spent the last couple of months preparing for our annual Special Olympics philanthropy event. This has always been a fantastic event and we are hoping to build upon the success we had with it last year. Our Chapter has always placed a high importance on giving back, and this is evident based on the fact we had a total of 1,922 community service hours last semester and donated over $2,500 dollars to various charities and organizations.

We have always maintained had a strong presence on the intramural field. Specifically, we have always had a strong soccer team which led to a second place finish in the general intramural season, and we walked away with a victory at the Kappa Klassic (a philanthropy event held by a sorority at Bucknell). We currently have teams competing in the intramural basketball league playoffs and are hoping we can add some more hardware to our collection. Intramural games are always some of everybody’s favorite events to attend and are a great way to show support to our Brothers.

This academic year has been a great success for our Chapter so far. Our New Members have integrated themselves very well and are true embodiments of the core values Chi Phi sets forth, as well as our own Phi Lambda Theta values. Personally I look forward to watching our Chapter continue to thrive and flourish at Bucknell.

Above: Phi Lambda Theta Brothers celebrating their victory at the Kappa Klassic.

Below: Brothers having a blast during the Chapter’s ski trip. 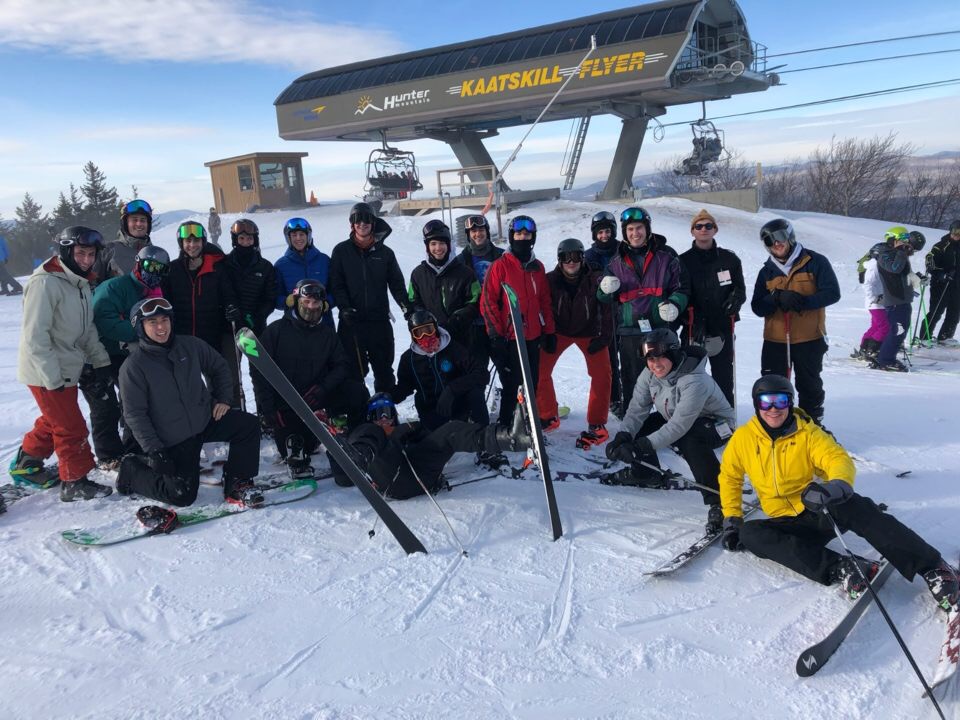 At the annual Alphas and Thetas Academy this January, Chi Phi was honored to host Stephen and Rae Ann Gruver as keynote speakers. The Gruvers shared the story of their son Max, who passed away in 2017 after a hazing incident at Louisiana State University.

Remembering Max and the impact that hazing has had on their family left such an impression on our members that the Fraternity and Educational Trust came together to serve as Lead Sponsors of the first Stop the Hazing #FlyHighMax 5k on February 2.

National Staff, Friends of Chi Phi, and members of the Rho Delta Chapter at Oglethorpe University came together with more than 600 other runners to support the Max Gruver Foundation’s mission to ensure that hazing is eliminated on college campuses.

The event was a great success for all parties, especially for the Foundation. John Fisher, Delta Pi 2013, even took home a medal for coming in 3rd for his age group. Perhaps one of the most meaningful moments of the 5k was when Rho Delta Brothers ran their final lap twice in order to stick with and support other Brothers still in the race. A real moment that shows true fraternity is about Brotherhood and community.

Chi Phi’s partnership with the Max Gruver Foundation and the Gruver Family continues with Stephen and Rae Ann scheduled to speak at the Psi Delta Colony at UNC Charlotte on March 24. If you are interested in bringing the Gruvers to speak with your Chapter or campus, contact Assistant Executive Director Danny Zayas to learn more about how to make it happen.

The event in images 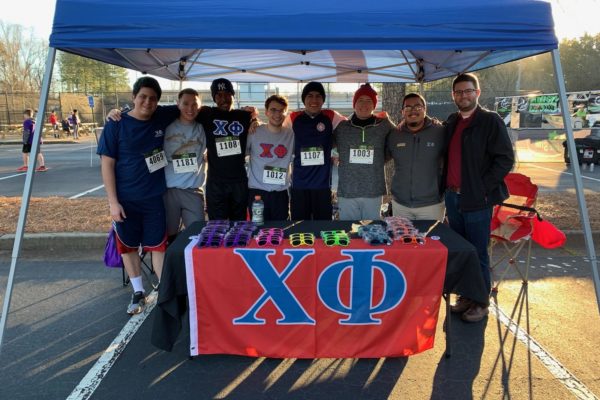 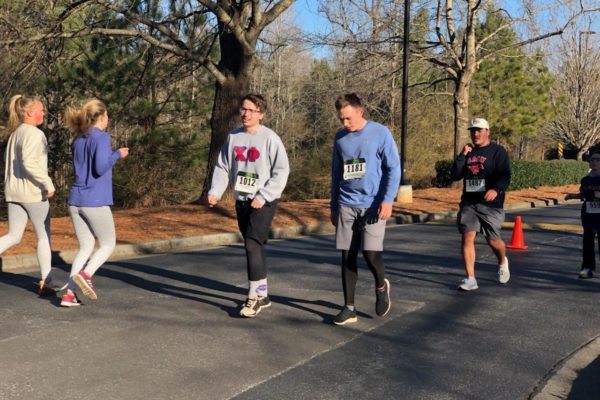 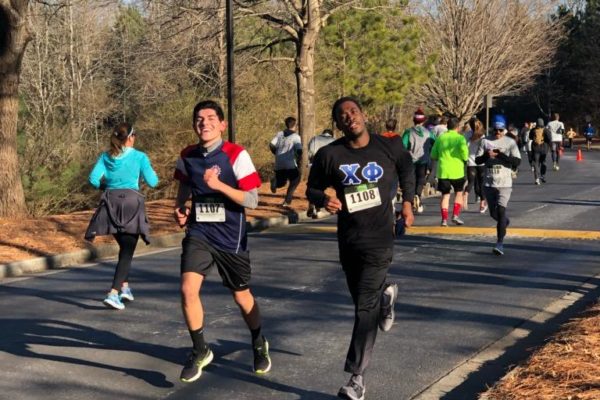 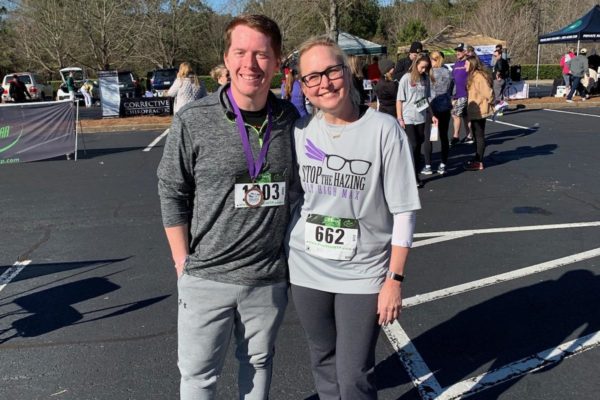 By Daniel | Chapter News | No Comments

A recent challenge laid out by the University of Nebraska-Lincoln saw the Alpha Theta Chi Chapter posed against sixteen other student organizations in a forty-eight hour fundraising challenge.

From the men’s volleyball team to Nebraskans for the Upgraded Treatment of Squirrels (no, seriously, they’re N.U.T.S.), these organizations took part in UNL’s #GlowBigRed challenge as part of the University’s 150th anniversary celebration.

The blitz challenge came with four additional incentives; an extra $1,000 to one randomly selected donor’s total, $250 to one randomly chosen organization, $250 to the group with the most money raised, and $500 to the group with the most individual donors. With such big stakes on the line, Alpha Theta Chi’s Alumni found themselves on a mission. Communication from Chapter Advisor Victor Martinez, Alpha Theta Chi 2002, was soon blasted via email and Brother after Brother stepped up to the plate.

When the dust settled and the donations were all in, Alpha Theta Chi found itself the victor of not one, not two, but THREE of the incentive awards! With $2,030 raised by twenty-seven donors, they won $250 for the most raised and the $500 award for most individual donors. To top it off, Rick Wintermute, Alpha Theta Chi 1984, was chosen as the donor to have $1,000 added to his contribution.

All in all, the Chapter found itself on the receiving end of $3,780 to be used for member scholarships.

“Wow!! Thank you all,” Brother Martinez wrote in an email. “Proud to be a Chi Phi. A great 48 hours for Alpha Theta Chi! These scholarships are going to be fantastic to help recruitment both this spring and summer.”

Join us in congratulating our Brothers on this amazing effort and their great success! 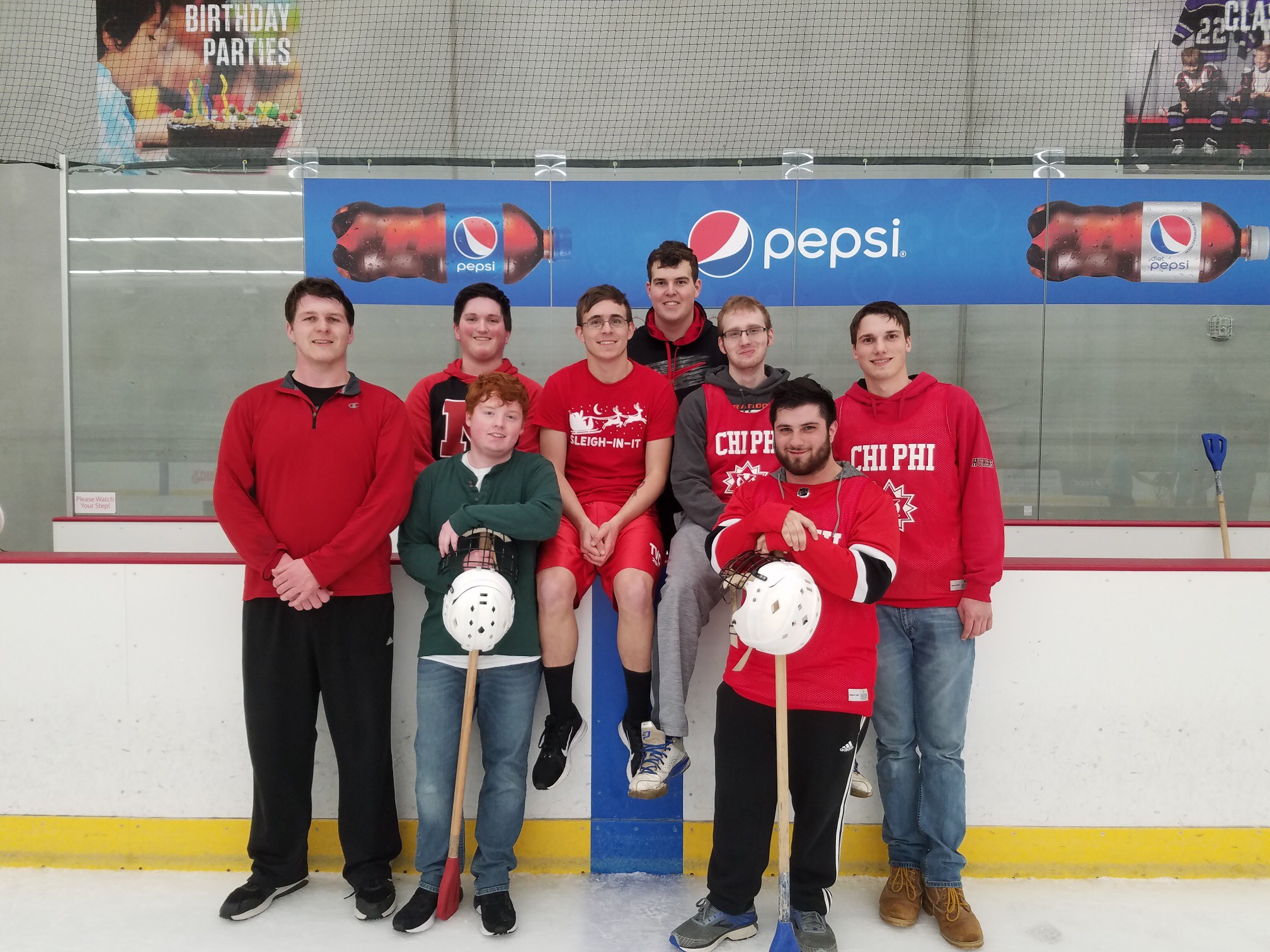 NextPrevious »
Become a Man of 1824 I'm Interested in Joining